Even though things may have been quiet here, it’s been a hive of activity in the real world. For a while now I’ve been hard at work building my a drone synth. I really got back into building audio electronics again after making a dub siren for a friend last year and slowly I’ve been studying designs and modifying them into my own probably far to complicated version.

I had the main voices for the synth finished a little while ago and have been working on circuits for modulation sources. I decided that one circuit in particular would be useful outside the synth I’m building as a modulation source for my beloved Juno 6. END_OF_DOCUMENT_TOKEN_TO_BE_REPLACED 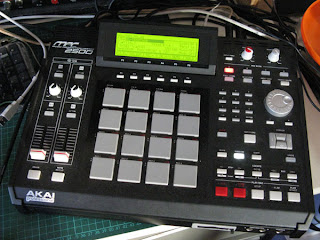 For some reason since getting this piece of kit I’ve found myself singing “I love my mpc” to the tune of Dire Straits ‘Money for Nothing’. I ought to stress at this point that I don’t like Dire Straits at all. I have been bemused in recent years as some of the young hip kids all seem to think Mark Knopfler is a guitar god. But then I never did do guitar heroes. You could be the most technically gifted musician in the world, but if you can’t put any soul into what you’re producing it ain’t worth shit.

I’ve been intending to get my arse back into gear on the blogging front for some time. The internet hasn’t got quite enough rubbish on it yet so I thought it only my duty to add a bit more. To be honest I used to find this a good way of reflecting on what I’d been up to – nothing of great importance hence the title.

I’m currently enjoying the first day of my holiday after a pretty severe 4 weeks of maternity cover. With the arrival of my memory card on Saturday I’ve finally been able to get to grips with my sampler. It wouldn’t have matter really if the card had arrived earlier in the week as I didn’t have the time or energy to play anyway. I still felt a certain frustration as I saw no small parcel in each days post. It was pretty naive of me not to twig that buying something from an on-line outlet called ‘7 day shop’ would in fact take seven days to reach me! Anyway, armed with a whole four gigabytes of memory space I’ve been having oodles of fun hitting and shaking bits of percussion and other inanimate objects and sampling them.
For a long time I’ve been struggling with making music on my computer. Partly as I find staring at a monitor for to long tires me and drains me of any inspiration. I spend quite long enough in front one at work. I’ve realised I need to physically play something when I’m creating. I could have got a control surface to interface with the computer, but as I really wanted to make a break from the screen. Hence the MPC.

And I have to say so far it has surpassed my ideas of what I can do with it. True there may be thing the computer can do better but I have also come to realise that having limitations to work round is in itself a source of creative inspiration. My Juno is the piece of kit that has really bought this home to me. It’s fairly limited in the sounds it can make, has no midi and no memory to store the sounds you’ve created. But the sounds it does make are great and knowing what is not possible makes it easy to create a sound fast. And it’s great to play.

I believe it’s in the playing that soul is transmitted into the music you create. You can’t program it. And I’ve now got a sequencer I can really play at the heart of my studio rather than a screen that gives me eye strain.